Among potential capacities of Iran's tourism, we can name the sea and the coast, which have
both large capacities for investment and great tourist attractions.

Today, in most countries of the world, sea tours, sea transportation, sea sports and recreation
centers are under great attention. Water recreational activities like diving and other beach and
offshore entertainments are at the top of tourism programs.

Although we have been addressing this issue for some years in our country (Iran), it still
needs serious attention. Recently, with the development of Free Zones and the expansion of
business and commerce space, the potential needs for the construction of business
infrastructure, such as administrative and commercial spaces, have been developed. These
needs increase when it comes to tourists’ demands for several days of business and
recreational accommodation. In areas such as Anzali, exploiting sea attractions, infrastructure
development and sea recreations will lead to foreign and domestic tourist attraction and boom
the tourism industry. On the other hand, the establishment of such residential areas would
occasionally boost the region's economy and reduce unemployment in the region.

Anzali Free-Zone is one of the only free trade Zone areas located in the south of the Caspian
Sea (8609 acres, 40km coastline, population: more than 30 thousand). There are great
potentials for expansion in this region due to beautiful natural sceneries, recreational
complexes like recreational waterfronts, equilibriums, birds’ garden and sport complexes, a
marina sailing complex, multiple transportation infrastructures to establish high-tech
industrial units, processing and packaging factories for agro products, tourism complexes
with first grade equipment and convenient weather.

The location of Anzali Free Zone in the North of the country, as the most tourist-friendly
region in the whole country of Iran, reveals the necessity of the recreational facilities
development for tourists more than before. Anzali Free Zone, as one of the commercial hubs
of Iran, has a large share in the country’s land transport. Also the benefits and incentives of
the Free Zone have created special business opportunities for businessmen and economic
groups of Iran and the neighbor countries. These needs will increasingly evolve with the
development of Free Zone activities.

Anzali Free Zone is located on the North-South International Corridor, known as Nestrack,
which is referred to as the 21st century freight corridor between Asia and Europe. A special
position for communication with the Caspian littoral states, proximity to the ports of
Astrakhan and Lagan in Russia, Krasnodar in Turkmenistan, the Aktau in Kazakhstan and
Baku in Azerbaijan, access to CIS countries markets (300 million consumers), existence of
transit routes and connections with cities and regions of the country and neighboring
countries including Russia, Central Asia and the Caucasian countries, proximity to the largest
Caspian oil and gas reserves and 20-year tax exemption make Anzali Free Zone an inviting
region for investment.

Advantages of Investment in Marine Tourism in Anzali Free Zone:
Also commuting of 11 million automobile devices, entrance of about 300 thousand tourists
and 60 thousand applicants for recreational hovercraft in Bandar Anzali in 2016, show the
tourists’ desire is increasing and also indicate the great potential of the region for creating
prosperity and facilitating the tourists and business traveler’s affairs. So investing in marine
tourism industry plays a significant role in development of the Free Zone in areas with high
tourist capacity.

The purpose of this project is to build and operate a recreational craft in Anzali Free Zone for
cruising in the Caspian Sea, around Anzali.

To achieve this accomplishment, a catamaran ship with the carrying capacity of 200 people is
considered. This float is intended to be in Anzali Free Zone for the purpose of marine tourism
with a desirable space provided through appropriate design.

Advantages of Investment in Anzali Free Zone:
- Specialized and inexpensive workforce
- inexpensive energy costs
- inexpensive land
- Exemption from customs duties and commercial profits for importing raw materials
and machinery
- Exemption from customs duties for goods produced in the Free Zone and imported to
the other parts of the country according to the value added law
- Advantages of the Value Added Law
- 20-year tax exemptions from the date of exploitation for a variety of economic
activities 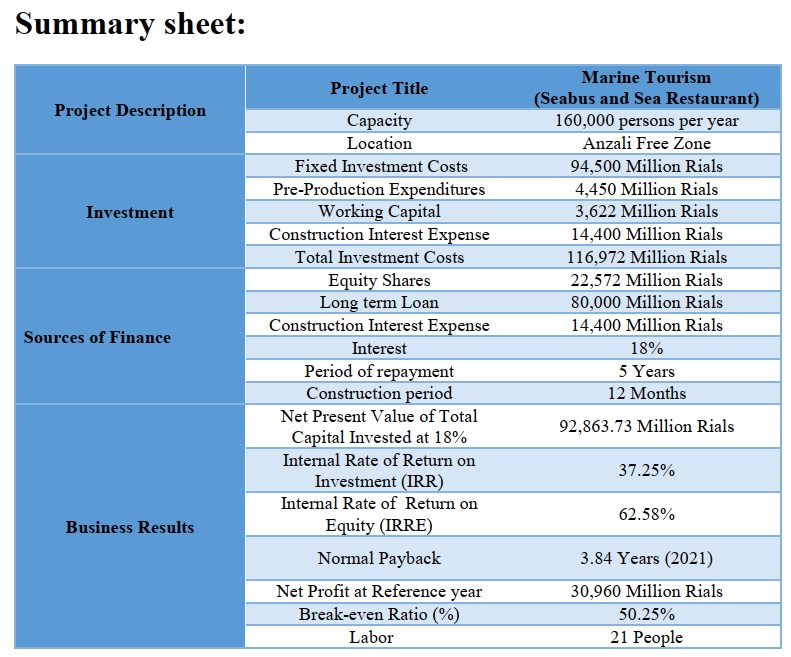