Development of free zones and expansion of business and commerce markets have created
critical demands for providing business infrastructures such as constructing administrative
and commercial spaces.

These requirements increase when it comes to tourists’ demands for several days of business
and recreational accommodation. Therefore, the construction of modern residential centers
according to international standards will attract both domestic and foreign tourists, boosting
tourism industry. On the other hand, the establishment of such residential places will improve
the economy and reduce unemployment in the region.

Anzali Free-Zone is one of the only free trade Zone areas located in the south of the Caspian
Sea (8609 acres, 40km coastline, population: more than 30 thousand). Besides, Anzali freezone benefits from neighboring countries and cities and big markets of Caucasian and central
Asian countries which have made this region one of the most important commercial corridors
among Caspian Sea countries. Also, the connection of Caspian port with Baku, Türkmenbaşy
Turkmenistan, Turkmenia, Aktau Kazakhstan, and Astrakhan Russia and also effective use of
multiple transportation (Sea, Rail), connection of Urumqi China to Aktau Kazakhstan,
beautiful natural sceneries, recreational complexes like recreational waterfronts, equilibriums,
birds garden and sport complexes, a marina sailing complex, multiple transportation
infrastructures, tourism complexes with first grade equipment and convenient weather have
made great potentials for expansion in this region.

Anzali Free Zone is located on the North-South International Corridor, known as Nestrack,
referred to as the 21st century freight corridor between Asia and Europe. Because of having
a special position for communication with the Caspian littoral states, adjacent to the ports of
Astrakhan and Lagan in Russia, Krasnodar in Turkmenistan, the Aktau in Kazakhstan and
Baku in Azerbaijan, access to CIS countries markets (300 million consumers), existence of
transit routes and connections with the cities and regions of the country and neighboring
countries including Russia, Central Asia and the Caucasian countries, proximity to the largest
Caspian oil and gas reserves and 20-year tax exemption, Anzali free zone has turned to an
inviting region for investment.

Advantages of establishing a Hotel in Anzali Free Zone:

The location of Anzali Free Zone in the north of the country, as the most tourist-friendly
region, reveals the necessity of constructing recreational and residential complexes.

Anzali free zone, as a commercial hub in Iran, has a large share in the country’s land
transportation. Also the benefits and incentives of the free zone have created special business
opportunities for businessmen, Iranian economic groups and neighbor countries. These needs
will increasingly evolve with the development of free zone activities.

Commuting of 11 million automobile devices in 2016 and 9 million passenger cars in 2015
which arrived in Bandar Anzali through Khomam and Rezvanshahr route, shows that the
desire of tourists for entertainment in Bandar Anzali is on the increase and also indicates the
great potential of the region for creating prosperity and facilitating tourists’ and business

In Nowruz holidays of 2018, about 294,800 tourists entered Anzali free zone which shows
a 54-per-cent increase compared with the same period in 2017. Also 93,289 tourists stayed in
hotels and resettlement centers, which is 14 percent higher compared to the same period last
year.

In addition, if the tourism desire increases with the same trend in coming years, the need to
build residential centers will be even more obvious. The increasing number of Bandar Anzali
tourists during 2013 to 2017 is shown in the table.

meetings as well as domestic and foreign tourists in Anzali Free Zone, a 5-star hotel is
proposed. The purpose of this hotel is to provide accommodation services including three
main meals (breakfast, lunch and dinner) at the restaurant, snacks at the coffee shop,
relaxation services (multi-purpose sports halls, swimming pools, saunas and Jacuzzi), a
children's recreation center, showroom and business services such as conference halls,
conference rooms, etc.

- Foreign investment participation up to 100%
- Full guarantee of foreign capital and their profit
- 20-year tax exemption on legal and real person’s income
- custom duties and commercial benefits exemption for importing raw materials,
machinery and spare parts for regional producers
- Exemption from customs duties for goods produced in the free zone and imported into
the country at the value added rate 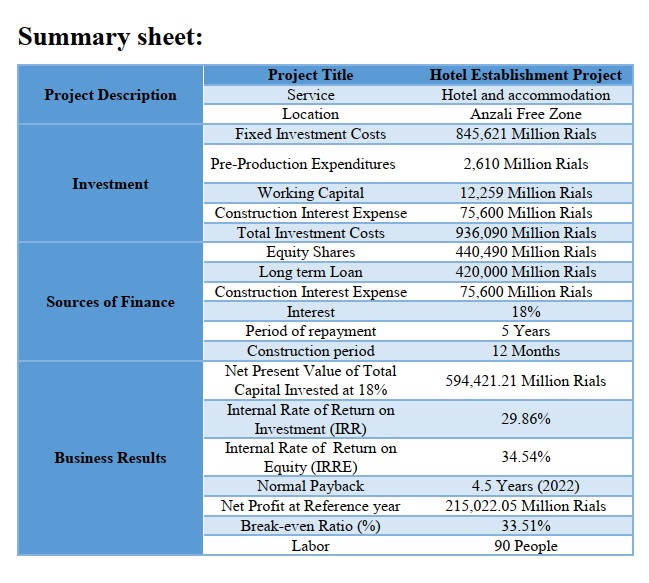